Man, I've been featuring a lot of books on the ole blog recently, haven't I? It's a pleasure and a lot of fun - and yes, with the impending arrival of twindom, it's also a delight to hand the reins over to someone else, and let them ride us both off into the sunset while I busy myself installing medicine cabinets, picking up baby gear hand-me-downs from generous friends, and cleaning out our closets.

Oh wait, was that one of things I wasn't supposed to admit? Oh. Oops. Hmm, does pregnancy brain only affect the partner who's pregnant? What's my excuse, then?

Well, then, let me just come out and say I am DEE-lighted to feature Chrys Fey here today, not only because she's giving me time to paint the nursery, but MAINLY and MOSTLY because she's a great blogger friend and a prolific and talented writer. Take it away, Chrys!


Thank you for opening your blog to me, Liz, so I can share my newest short story, Witch of Death, with your lovely readers. :)


Ever since I was a kid, I’ve loved the moon. When I realized the moon followed me in the car, I thought it only did that for me and that I was special. I thought the man on the moon was my friend. I used to talk to him in whispers from my bedroom window. I even pretended he was my boyfriend. Hey. I was eight. Don’t judge me! :P

The point is, the moon had been of deep fascination to me and now it’s a constant source of inspiration. In Witch of Death, a witch commits murder during a full moon. In Ghost of Death, the moon has an even bigger significance. Before my MC, Jolie, dies, she sees the moon and recites the lullaby “Goodnight Moon,” a bedtime story I loved.

QUESTIONS: Do you remember Goodnight Moon from your childhood? Do you like the moon? 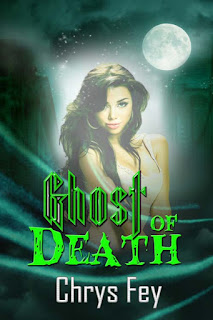 Jolie Montgomery, a twenty-one-year-old woman, wakes up in an alley next to her corpse. She has no memories of her murder or the night she died. She didn’t even see the killer’s face before he or she took her life. Wanting justice, Jolie seeks answers in the only way a ghost can...by stalking the lead detective on the case.

Avrianna Heavenborn is determined to find the person responsible for a young woman’s death. She gets closer to the killer’s identity with every clue she uncovers, and Jolie is with her every step of the way.

But if they don’t solve her murder soon, Jolie will be an earth-bound spirit forever.

With the sound of her mom’s grief wafting up to her, Jolie came to terms with her present state. I’m dead and now my mom knows it. She eyed the door in front of her. She hadn’t yet walked through a door, but if her hand could pass through metal then she knew she could move through wood.

If I have to be a ghost then I’ll be a damn good one. All across the afterlife I’ll be known as the Ghost of Death! And I’m going to start by walking through this damn door!

She would’ve taken a deep breath to brace herself if she could have, so she mentally pumped herself up instead. You can do it! Easy-peasy. Nothing to it. And she took a step forward. Solid matter slipped around and through her form. On the other side, a familiar site confronted her: a black and white bed, the bright green shag carpet in the middle of the room, and a white desk.

Stepping up to her desk, Jolie eyed her ancient desktop computer, the one she used before her dad gifted her with a laptop when she announced she was accepted to the local university. Wanting to send out the first ever tweet from the afterlife, she pushed the button to bring the device to life, but her finger poker straight through it. Resigning to her Twitter-less fate, she moved toward the full-length mirror hanging on the wall. She saw nothing. Not even a shimmer in the air hinted at her presence.

Being a ghost sucks! 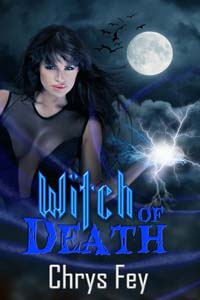 Detective Reid Sanders doesn’t believe in the supernatural, but when he’s faced with a crime scene that defies the laws of nature, he has no other choice but to start believing. And solving a magical murder involves working with a witch.

Liberty Sawyer embodies the look of your classic evil witch, so, it’s no surprise when she uncovers the murderer is a witch that she becomes Reid’s number one suspect. If she can’t convince him otherwise, more people could lose their lives to dark magic, including her. 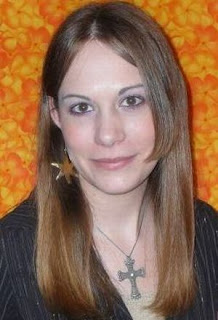 When Fey was six years old, she realized her dream of being a writer by watching her mother pursue publication. At the age of twelve, she started writing her first novel, which flourished into a series she later rewrote at seventeen. Fey lives in Florida where she is waiting for the next hurricane to come her way.

You can connect with her on Facebook and her blog, Write with Fey. She loves to get to know her readers!